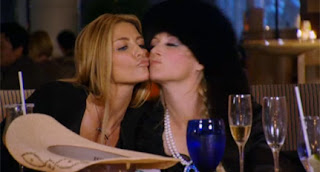 In the first half of the show, everyone who had kids took them back to school. It was nice to see everyone's offspring. Opinions about that:

Once the kids were all off to school, Ronnie went to a meeting with liquor store owners and continued to prove you don't need to be smart to do well in life. Say what you will but if you're starting a company, shouldn't you know what's going on with your product and its industry? I'll give her credit for her wine's name though- Rehab. I don't drink whatsoever but I'd try her wine just because of the name. Also she was right about the label; it could be a little bolder.
I didn't really like Ronnie but halfway through the episode I started warming up to her a little. I liked that she invited Mary (okay, maybe that's more her son's doing but still) and supported her when Jody and Mia came up to her.
WTF IS WITH MIA?! Everybody's having a good time and she feels the need to start something over a comment nobody cared about initially when it first came up however long ago it was. If someone isn't sure you're Jewish, confirm or deny you are then move on. I don't see how it's necessary to get all worked up about someone's uncertainty and then verbally attack them. Jody too. I don't see the issue with Mary exposing her belly. So what she's 48? She looks great for her age, it looked fine and it's none of their business. I'd be more concerned about Jody who's like 60 and still wearing a tiara. What are you, 5?
And Christina as usual was fantastic and funny. She's my favourite.
at 10:30 AM
Email ThisBlogThis!Share to TwitterShare to FacebookShare to Pinterest
Labels: recap