This episode was a little calmer compared to last weeks. The girls headed up to the Okanagan Valley in Kelowna, BC for a wine tasting. Mary and Jody of course were still not talking but it looks like Reiko's joined Team Anti-Jody too. Apparently she bought around $32,000 worth of merchandise at Jody's store, The Glass Castle, and there was a merchants fee Jody was supposed to pay but now she's harassing Reiko to owe it to her. I can't imagine spending that much money only to be gone after for a fee I' not supposed to pay. I wouldn't shop there. Evidently Jody isn't the great businesswoman she likes to say she is.

Christina also told Mary about Mia staying at her house. I don't think Mary was pleased. It come up later while the girls were on the trip and Christina ratted Mia out. Oh Mia. You seem like one hot mess.

The trip looked like fun but there were some weird elements to it. Like the guy in the pyramid telling everyone he had sex there. WHAT? Why would you tell people that? And what is with all the fur Jody and Mia wear? It was cute at first but not it's just gaudy and tacky. 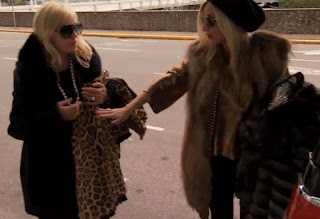 Oh and how cool did that cold-sauna thing look? Christina and Reiko were worried about their implants freezing but Christina went with Ronnie's son Jhordan while Reiko looked on.

In the end, Mary and Jody came to ceasefire but I think we all know it ain't gonna last.
at 9:27 PM
Email ThisBlogThis!Share to TwitterShare to FacebookShare to Pinterest
Labels: recap