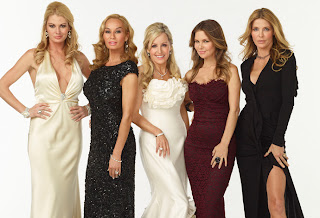 Alright, so I've started watching the Real Housewives of Vancouver (RHOV) and I'm completly hooked! Normally I avoid reality shows. My tipping point is Jersey Shore. You watch it? Correspodance over.

The RHOV I accidentally got intrested in. I think I was watching Modern Family on Global, saw an ad for RHOV, noticed a horse and well, naturally I had to see. I intended to just watch the first 5 minutes for the horse but before I knew it the end credits for the 5th episode were rolling. IT'S SO GOOD. I'm not really intrested in the drama, I just like seeing their homes, cars and what they wear.

And like a lot of other people, I'm sure, I have my thoughts and opinions about the cast.

She's my favourite. Probably because she's the one who rides the horse but she's also pretty funny and absolutly goreous. She's also inspired me to get a zebra print chair and a greyhound.

She's my second favourite. While I she can be very pretty at times, I think she could put the botox needle down. I bet she's the producer's favourite. Her cars get a lot of air-time.

I actually kinda like her. She's a lot like my mom; loves food, bossy, entreprenuer. However I think she is too judgmental, forward and bossy. She needs to stop telling Christina and Mary how to live their lives. Ronnie arguably does a lot less then those two but she's never been called out for it. If Christina wants to get drunk and strip at her birthday party, it's her decision. And Mary's already had a career. If she wants to spend the rest of her life blowing bubbles, she should do so without comment. She was right about Mia though when she wanted to go back to London. It's 2012- if your apartment is a mess, go on Google and hire someone to take care of it. It probably works out a lot less then a flight there to do it yourself.

She's really sweet and quiet. I think she should ditch her singer agent Adam H, or whatever he's called. He seems sketchy.And she could do without Ronnie. If you're a drunk: fine. But don't blame it on someone else.

Oh Ronnie. Five kids, two moved out, one in boarding school and two nannies to look after the other two. What does she do all day?! Besides get drunk and blame it on other people. In one episode she made some comment to Mary about she hadn't made millions on her albums or whatnot but what has she done? Like really. She's rapidly becoming my least favourite. Her tennis court is her only redeeming factor.
at 10:26 AM
Email ThisBlogThis!Share to TwitterShare to FacebookShare to Pinterest
Labels: recap